Kids of Kathmandu is a non-profit organization that utilizes artistic resources to raise awareness about the needs of orphans in Kathmandu, Nepal. Founded by modern furniture designer Andrew Raible and his partner, photographer Jami Saunders, Kids of Kathmandu’s mission is to raise funds to better the lives of Nepali orphans, and to increase global visibility about their plight. Explain Raible and Saunders, “our aim is to provide a sense of safety and encouragement for the children so that they can fully realize their potential in the rapidly changing environment of Nepal.”

Raible and Saunders initially connected over their mutual philosophies of peace and giving back. The couple chose to focus on orphans in Kathmandu because of what Nepal stands for as a nation, and to preserve the peaceful, enlightened way of life that has long been cultivated there. They explain, “[Nepal] is a country of open-mindedness. […] Nepal is also situated between two powerful countries of India and China. In a region of ever growing volatility, the existence of a peaceful country is vital.” 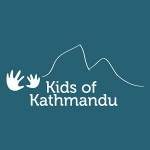 Using their connections in contemporary art and design, Raible and Saunders have helped to raise funds for Kathmandu orphans by organizing philanthropic projects and events. Their most recent endeavor is called “the Dining Project” – a two week long fine furniture auction to benefit the Kids of Kathmandu and fund nutrition programs in Nepal. The Dining Project consists of 14 valuable auction items donated by renowned designers. According to Lori Holcomb-Holland of The New York Times, “Proceeds from the Dining Project will to toward a new kitchen and the food it provides,” and that “Previous auctions have helped pay tuition for 49 children at the New Youth Children’s Development Society, an orphanage in Nepal, as well as establish stable electricity, water purification systems and medical care.”

The Dining Project auction went live on Saturday, March 1st and will culminate in a gala on March 13th in NYC. Some of the items being auctioned for the Kids of Kathmandu include a table from BDDW, a one-of-a-kind rug from Amy Helfand, tabletop pieces from Ted Muehling and David Weeks, and many other incredible designer pieces from David Byrne, Bec Brittain, Standard 41, and more.

Learn more about the organization, and how Raible and Saunders fuse art and design with philanthropy at the Kids of Kathmandu website.